CPD will keep its Saginaw, Mich., office, which it has occupied for more than a century

ANN ARBOR, Mich. – Central Property Development, Inc. has opened in Ann Arbor (614 S. Ashley) after more than a century in Saginaw, where it still maintains an office. President and CEO John Strobel, an Old West Side resident and the fourth generation in his family to run the business, purchased the 1,000-sf building on the city’s Old West Side in 2014, extensively remodeling the interior and painting and landscaping the exterior. 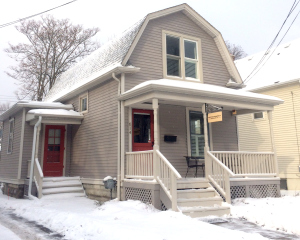 Central Property is a longtime, family-owned business with fifth-generation shareholders; Ann Arbor resident Jesse Strobel, John Strobel’s daughter, recently joined the business as an associate. This is a testament to the longevity and strength of the business considering only 30 percent of family-owned businesses survive into the second generation, 12 percent to the third, and fewer than 5 percent to the fourth, according to a 2014 study by Grand Valley State and Western Michigan University.

After 105 years, the business is now preserving and building on the family legacy, though it is not exclusively family-owned and operated. Terri Drenth, a Chelsea resident, is the vice president and corporate secretary of the company, a shareholder, and member of the Board of Directors.

“Ann Arbor is a great place to continue to grow our business,” said Drenth. “The historic nature of the city falls right in line with the rich history of Central. Setting up our office here has been a smooth transition.”

Not only is the company in Ann Arbor, so is one of its recent investments, a building housing Advanced Auto. Other recent acquisitions include Walgreens (Las Vegas, Nev.), CVS (Whitehall, Ohio) and the Batteries Plus Bulbs corporate headquarters (Hartland, Wisc.), all of which Central Property manages as single-tenant, triple-net properties.